When you live in a small space every inch counts. That’s why when we moved into our tiny 2bedroom condo, I found the master bedroom closet to be quite perplexing.  The closet itself was a decent size, but  a bit strangely shaped.  However, the perplexing thing was the size of the closet door which was very tiny in comparison to the closet.  Tackling this closet was actually a fairly quick project but it has made a HUGE difference both in terms of the overall look of the room and especially in terms of the functionality of the space.

For reference, here’s the “footprint” of the closet (from above):

As you can see part of the closet is standard depth, but there’s a part of it that is very narrow (this is because there’s a large but shallow built-in cabinet in the bathroom (which shares a wall with the closet( that takes up the rest of the depth.  You can also see in the diagram the placement of the tiny door (please forgive the blurry image!):

I never understood this itty-bitty door, or its placement all the way in the corner.  Most of the closet was almost impossible to get to.  We made it work for a while, but it was so hard to put anything away so (not surprisingly) things often ended up on the floor instead.

Enter my closet solution: elfa (from the Container Store) plus slatwall plus new, bigger, sliding doors.  The sliding doors allowed us to have a nice big opening for the closet so we could reach the whole thing without taking up any of the space of the bedroom since they don’t open into the room.  Here’s a shot of the new space where you can see what a difference just putting in the new doors made! 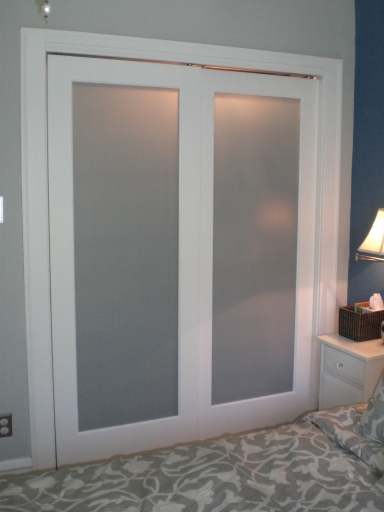 Most of the functionality of the new closet came with adding a customized Elfa closet solution (walnut décor and platinum shelves, if you’re interested).  The nice thing was how customizable it was—I now have space for dresses, shirts, and skirts at the perfect height for my things.  Plus, because the closet is not very big, it wasn’t super expensive, even with the “upgrade” to the nicer shelves. Here you can see the different “zones” I created – one for shirts and skirts on the right:

And one for dresses and other longer items on the left:

As much space as I think I gained by adding the Elfa, I knew I could eke a bit more space on the side wall, and especially in the weird not-very-deep part of the closet.  That’s when it occurred to me to try using slatwall for shoes and accessories, an idea which had been brewing for some time after seeing this stuff all over in store displays.  You can see the slatwall in both of the pictures above, but here is a closer-up pic in case you’re not sure what the heck slatwall is (it is what my shoes are attached to):

The slatwall was actually somewhat hard to track down.  Apparently it is usually sold in large quantities to stores, and not in single sheets for residential applications.   However, I did finally find out that the Menard’s near us sells single sheets of white slatwall, which is exactly what I needed.  Unfortunately it wouldn’t fit in our car (not even close!), but we were able to have our contractor pick it up for us in his truck as part of the install cost.  It was a quick job, but well worth it.  I then ordered from a from an online supplier of retail furnishing the interior fittings I wanted—slanted shoe shelves, hooks, belt holder, necklace display, and some shallow shelves.  I use some clear acrylic shelves to use the tiny bit of still-unreachable space in the narrow part of the closet to store large purses!

Just to help visualize the change, here’s what he new layout looks like (from above):

I’ve been very pleased with this combination and definitely recommend it if you have a non-traditional or narrow closet space.  I found that with all the many interior fittings that are available to use with slatwall that this is a great use of space for any non-standard size closet.

What do you think?  What have you done to find extra space in your closet?   Has anyone else tried slatwall in a closet?  I’d love to see pictures!

I welcome your feedback, ideas, and comments! Cancel reply