Hello!  We’re in full summer mode here at 2BB–lots of time at parks, and lounging on the deck, and going for walks, and getting ice cream, and just generally not doing any blogging!  But as we were hunkered down in our basement a few days ago during a particularly hot weekend, I remembered that I was behind on a few basement updates so I thought I’d pop in for a brief basement update!

My last post about this part of the basement focused on the new carpet rugs we had cut from a remnant to look like wall-to-wall carpeting: 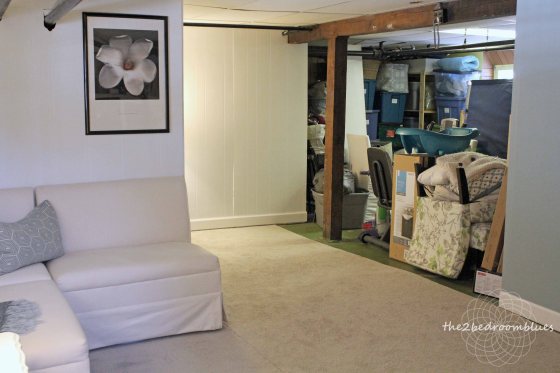 What was very much missing though was a way to separate our storage area from our rec room area–both to keep the kiddos out but also to, you know, hide the mess!  I purchased some inexpensive grommet curtains from IKEA for just this purpose last year, but of course didn’t get around to installing them until a few months ago.  But it is such a nice addition to the space! 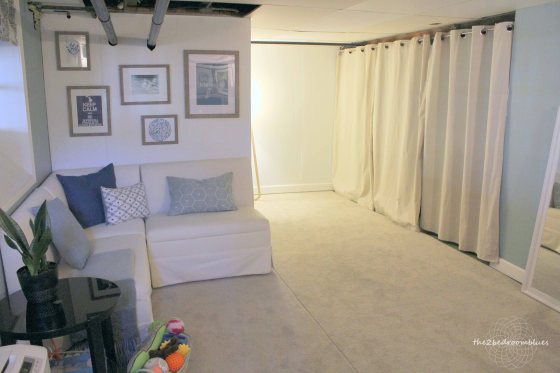 Of course, after all this I hemmed one of the curtains too short by 2 inches.  Apparently the mantra of “measure twice, cut once” doesn’t help you if you’re also trying to keep an eye on two rambunctious kiddos at the same time 🙂  Oh well–someday I’ll get to fixing it (the curtains came in 2-packs so I have one extra to play with!).  For now though, I really only notice in pictures–like this one (oy!). 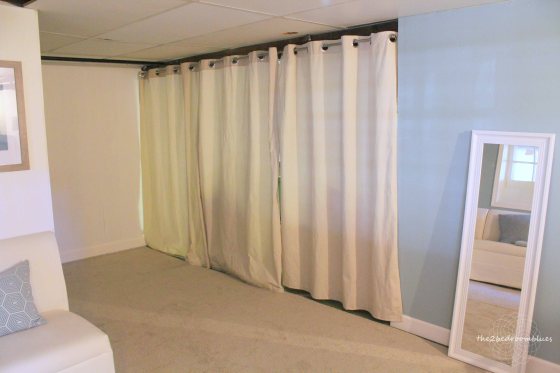 The funniest part of this for me was when DH admitted–after helping me hang the curtain rod and once I had the curtains up–that he had serious doubts about my plan.  As in “okay, crazy lady, for some reason you want to hang a bunch of curtains across the middle of a room??”  But he, very kindly, decided to trust me, yet again, and reserve his judgement until it was all put together.  And luckily he loves it (whew!).

You may also notice I finally got a gallery wall up as well: 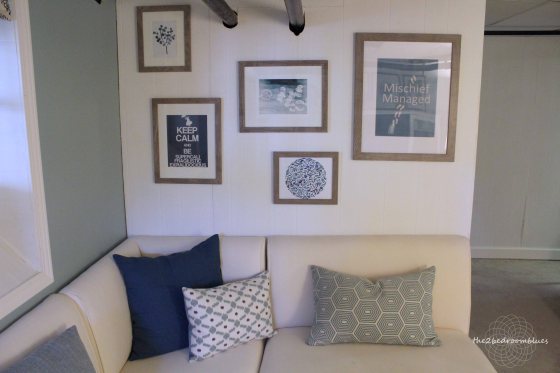 This is definitely still a work in progress, but I wanted to get some things in frames so I could at least see how to arrange the frames.  The frames might look familiar.  I’ve used them for the frames in our mudroom and bathroom before.  They are the perfect weathered wood frames to add some texture to a space and work really well with colorful art when you don’t want go with white or black. I’ve gotten them all at Michaels on crazy sales and may have a stockpile of them…

The bubble print was the only thing I purchased so far (from Minted), and the rest were either free printables (that would be the “Keep calm and be supercalifragilisticexpialidocious” printable!) or DIYs.  Right now the space feels a little flat to me still, so I may try to bring in some more exciting and rec-room-y art down the road, but for now it is so nice to have something up on the wall to fill the awkward space between the pipes; it definitely is helping it feel less basementy!

For fun, here’s a great ‘before’ shot of the basement from when we started to makeover the space: 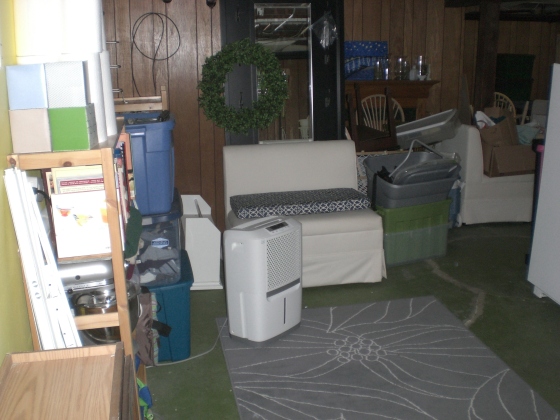 And the progress we’ve made:

I welcome your feedback, ideas, and comments! Cancel reply